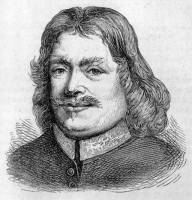 John Bunyan was born in Harrowden, near Elstow, Bedfordshire in 1628; an engraved stone in a field marks the spot where his house was. Bunyan lived a rather ungodly life as he grew up; in his own words he says ‘I had but few equals for cursing, swearing, lying and blaspheming the Holy name of God.’ As he grew up he attended the parish church of St Mary and St Helena in Elstow, however apart from the occasional pang of conscience, his soul was little affected by his years of attending this church. His parents sent Bunyan to school, but he learned little more than how to read and write. Being a poor tinker’s son he would have gone to a local school and received only a rudimentary education. There are reports of schools in the area having masters who neglected their charges shamefully at the time Bunyan was a boy. He himself says, ‘I never went to school to Aristotle or Plato, but was brought up at my father’s house in a very mean condition, among a company of poor countrymen.’ His education did not last long because he needed to help his family bring in some income so he became a tinker under his father.

At the age of 16, his mother and sister died of influenza. England at this time was in the middle of a Civil War between the King, Charles I and his Parliament. This was a struggle to see who would rule England, either a despotic monarch who believed he could do no wrong or the Parliament of the people. The Royalists were largely Anglo-Catholics who did not believe in religious toleration and the Parliamentarians were largely Puritan in their outlook. Puritans were so called because of their wish to purify the Church during the reign of Queen Elizabeth I (1558-1603). Puritans were opposed to Church hierarchy, pomp and ceremony and one of the main reasons for the Civil War was their desire to see the Church reformed. The term ‘Puritan’ was usually used as a derogatory one by their enemies. A more commonly used name at this time was ‘Dissenter’ and these included Baptists, Congregationalists, Presbyterians and the soon to be formed Quakers. For more information on the term, Puritan go to http://en.wikipedia.org/wiki/Puritan.

In 1644 John Bunyan joined the Civil War and it is believed that he joined the Parliamentarian forces. He was based in Newport Pagnell until he went home to take up Tinkering in 1647. It appears that in this time before he became a radical Christian, the Lord was protecting him from harm. He relates in his auto-biography ‘Grace Abounding’ that twice in his childhood he had accidents that could have resulted in his death and during the Civil War someone asked to replace him at a siege and this person was shot dead while on sentry duty. In 1649 he married and set up home in the High Street, Elstow until 1655; the building stood by what is now the St Helena Restaurant.

His wife often read to him from Christian books and she encouraged him to attend church twice a day yet nothing changed his ‘wicked life.’ One Sunday after hearing a very strong sermon he was troubled but still went out to play on the green a game of ‘tip-cat’ with the lads. In the middle of the game a voice did suddenly dart from heaven into my soul, which said, ‘Wilt thou leave thy sins and go to heaven, or have thy sins and go to hell?’ At this I was put to an exceeding maze; wherefore, leaving my cat upon the ground, I looked up to heaven, and was as if I had, with the eyes of my understanding, seen the Lord Jesus looking down on me.’ From this time John fought within himself and slowly his character began to change. He then came across some people who were attending an Independent dissenters’ church who met in St John’s Church, Bedford. He spent a lot of time under the teaching of the pastor John Gifford, and it was during this time that he gave himself completely to Jesus.

In 1655 he moved the family to 17 St Cuthbert Street, Bedford. The original building was demolished in 1838. By this time he had two daughters, Mary who had been born blind and Elizabeth. Bunyan started to preach at this time and he was a very gifted preacher. In later years John Owen, one of the foremost Puritan theologians, was asked why he went to hear Bunyan speak, he replied ‘I would happily exchange all my learning for the ability to preach Christ as the tinker of Bedford does.’

Bunyan soon had an itinerant ministry and hundreds came to hear him speak; he had a passion and in speaking of the central truths of Christian beliefs, he captured the heart and minds of his hearers. He himself describes how he preached; ‘In my preaching, I have really been in pain, I have, as it were, travailed to bring forth Children to God.’ He was led by the Holy Spirit and he felt ‘as if an Angel were at my back.’ He also observed that God would lay the salvation of certain individuals on his heart and it would be those people who would give their lives to the Lord at the meeting. He found that sometimes something that the Holy Spirit put in his mind during his talk had greater effect than all his preparations. He did receive opposition from many traditionalists because he had very little education and up until this time preachers normally had been to university. In 1658 his wife died; by then they had two daughters and two sons, and so he was placed in the difficult position of looking after four children, earning money to support them and continuing his role as itinerant preacher. He needed to marry again to give the children a mother and God, knowing what was ahead, found him one. In 1659 married Elizabeth and this was shortly followed by the death of his son John the following year.

Troubled times were ahead. During the time of Oliver Cromwell the Puritans became the leading religious force in the land but Cromwell died in 1658 and in 1660 Charles II was invited to return from exile to become King. Charles promised toleration at first, but the Anglo-Catholics, glad to be back in power after 20 years of persecution, were out for revenge and persuaded the King to persecute the Dissenters. To begin with, adherence to the Church of England Prayer Book was enforced and most Dissenters could not agree with it because it smacked of being much too ‘High Church’ and even Catholic. At this time the harsh laws against Dissenters were two years in the future and so there was no reason why Bunyan should not have been holding meetings.

In November 1660 he was asked to preach on a farm near Harlington and on his arrival he was told that a warrant had been issued for his arrest. His host wanted to cancel the meeting but Bunyan said, ‘No, by no means, I will not stir, neither will I have the meeting dismissed for this. Come, be of good cheer; let us not be daunted; our cause is good, we need not be ashamed of it; to preach God’s word…even if we suffer for it.’ At the start of the meeting two men entered and arrested him. The next day he was taken before the Justice of the Peace at Harlington House and then to Bedford Jail in Silver Street to wait until it was time to go before the Justice. He appeared before the County Quarter Sessions in January 1661 at the Chapel of Herne. Two of the three magistrates were very high church and they built up reputations in the coming years for much persecution of nonconformists. He was found guilty of not attending an Anglican church regularly and for preaching and sentenced to three months and told not to preach, but he responded ‘If I am out of prison today, I will preach the gospel again tomorrow-by the help of God’.

Bunyan’s new wife Elizabeth worked courageously to get her husband released even though she had suffered a miscarriage at the news of his arrest and had to look after her husband’s children. Elizabeth even went to the House of Lords in London to petition the release of her husband but was told that he could only be freed at the local Assizes. Not deterred Elizabeth petitioned the judges before and during the Assize later in the year, however, all her pleas were rejected. As a last resort she pushed her way into a room in the Swan Inn where the two judges were having a meeting and set forth her petition again, but again it was rejected and John Bunyan remained in prison for the next 12 years until the King passed the Act of Indulgence in 1672 that brought a certain amount of toleration towards Dissenters.

Bunyan’s time in prison was not as bad as some as he was allowed visits from his family who brought him food and from time to time. He was even allowed out of prison and he took advantage of this to preach as often as he could. The prison was very crowded, the hygiene was dreadful and life very hard. In order to support his family he made shoe laces and wrote. Before being imprisoned Bunyan had written a few tracts and a couple of books which had been published. In prison he wrote numerous things including ‘A Discourse Touching Prayer’ published in 1662 and his autobiography ‘Grace Abounding to the Chief of Sinners’ published in 1666 which became very popular.

On his release from prison Bunyan became Pastor of his church. At this time they had found their own home, a barn on Mill Lane which they converted into a church. The Bunyan Free Meeting Church now stands on that site. These next years were full as he fulfilled his duties as Pastor and Preacher and looked after his family that had grown by this time as Elizabeth had given birth to a daughter in 1668 and a son in 1672 although his dear daughter Mary died in 1668. However, his work was interrupted when he was put in prison again in 1675, this time in a smaller prison on the bridge that went over the Ouse. It was here that it is thought that he wrote the book that has made him so famous, ‘Pilgrim’s Progress’ that was published in 1678. This book made him famous around the world and it was said that no home was without the Bible and a copy of Pilgrim’s Progress. It is an allegorical story of Christian, who is burdened by the realisation of sin, travelling from the ‘City of Destruction’ to the ‘Celestial City’ of Zion.

Bunyan was released in 1676 and the years until his death were spent writing and preaching all over the country. His gift of preaching came into its own, with sometimes thousands coming to hear him. In these years he wrote several books including ‘The Life and Death of Mr Badman’ in 1680; ‘the Holy War’ in 1682 and the second part of ‘Pilgrims Progress’ in 1684. These years were the most fruitful of his life but they came to an end in 1688 when he caught Pneumonia travelling to London in terrible weather. Although only 59 he was never very strong and the 12 years in prison would have taken its toll, not to mention the many years of working for the Lord. His last words were, ‘Take me for I come to thee!’ He is buried in Bunhill Fields, City Road, London.

Recommended reading. Travel with John Bunyan by John Pestell, published by Day One. This is a short and easy book to read.

John Bunyan, His Life Times and Works by John Brown, published in 1885. This is considered to be one of the best biographies on Bunyan.